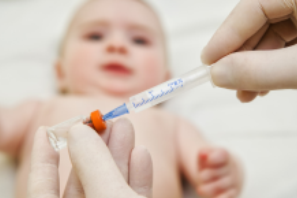 Columbia County Public Health no longer offers vaccinations at this time. It is recommend you ask your health care provider for any need vaccinations. If you would like a printout of your vaccination history, please call our public health nurse at 509-382-2181.

English:
Immunizations Important At Every Age

Diphtheria (Can be prevented by Tdap vaccination)

Diphtheria is a very contagious bacterial disease that affects the respiratory system, including the lungs. Diphtheria bacteria can be spread from person to person by direct contact with droplets from an infected person's cough or sneeze. When people are infected, the bacteria can produce a toxin (poison) in the body that can cause a thick coating in the back of the nose or throat that makes it hard to breathe or swallow. Effects from this toxin can also lead to swelling of the heart muscle and, in some cases, heart failure. In serious cases, the illness can cause coma, paralysis, or even death.

Hepatitis A (Can be prevented by HepA vaccination)

Hepatitis A is an infection in the liver caused by hepatitis A virus. The virus is spread primarily person-to-person through the fecal-oral route. In other words, the virus is taken in by mouth from contact with objects, food, or drinks contaminated by the feces (stool) of an infected person. Symptoms can include fever, tiredness, poor appetite, vomiting, stomach pain, and sometimes jaundice (when skin and eyes turn yellow). An infected person may have no symptoms, may have mild illness for a week or two, may have severe illness for several months, or may rarely develop liver failure and die from the infection. In the U.S., about 100 people a year die from hepatitis A.

Hepatitis B (Can be prevented by HepB vaccination)

Human Papillomavirus (Can be prevented by HPV vaccination)

Influenza (Can be prevented by annual flu vaccination)

Influenza is a highly contagious viral infection of the nose, throat, and lungs. The virus spreads easily through droplets when an infected person coughs or sneezes and can cause mild to severe illness. Typical symptoms include a sudden high fever, chills, a dry cough, headache, runny nose, sore throat, and muscle and joint pain. Extreme fatigue can last from several days to weeks. Influenza may lead to hospitalization or even death, even among previously healthy children.

Measles (Can be prevented by MMR vaccination)

Measles is one of the most contagious viral diseases. Measles virus is spread by direct contact with the airborne respiratory droplets of an infected person. Measles is so contagious that just being in the same room after a person who has measles has already left can result in infection. Symptoms usually include a rash, fever, cough, and red, watery eyes. Fever can persist, rash can last for up to a week, and coughing can last about 10 days. Measles can also cause pneumonia, seizures, brain damage, or death.

Meningococcal disease has two common outcomes: meningitis (infection of the lining of the brain and spinal cord) and bloodstream infections. The bacteria that cause meningococcal disease spread through the exchange of nose and throat droplets, such as when coughing, sneezing, or kissing. Symptoms include sudden onset of fever, headache, and stiff neck. With bloodstream infection, symptoms also include a dark purple rash. About one of every ten people who gets the disease dies from it. Survivors of meningococcal disease may lose their arms or legs, become deaf, have problems with their nervous systems, become developmentally disabled, or suffer seizures or strokes.

Mumps (Can be prevented by MMR vaccination)

Mumps is an infectious disease caused by the mumps virus, which is spread in the air by a cough or sneeze from an infected person. A child can also get infected with mumps by coming in contact with a contaminated object, like a toy. The mumps virus causes swollen salivary glands under the ears or jaw, fever, muscle aches, tiredness, abdominal pain, and loss of appetite. Severe complications for children who get mumps are uncommon, but can include meningitis (infection of the covering of the brain and spinal cord), encephalitis (inflammation of the brain), permanent hearing loss, or swelling of the testes, which rarely results in decreased fertility.

Pertussis (Whooping Cough) (Can be prevented by Tdap vaccination)

Pertussis spreads very easily through coughing and sneezing. It can cause a bad cough that makes someone gasp for air after coughing fits. This cough can last for many weeks, which can make preteens and teens miss school and other activities. Pertussis can be deadly for babies who are too young to receive the vaccine. Often babies get whooping cough from their older brothers or sisters, like preteens or teens, or other people in the family. Babies with pertussis can get pneumonia, have seizures, become brain damaged, or even die. About half of children under 1 year of age who get pertussis must be hospitalized.

Polio (Can be prevented by IPV vaccination)

Polio is caused by a virus that lives in an infected person's throat and intestines. It spreads through contact with the stool of an infected person and through droplets from a sneeze or cough. Symptoms typically include sore throat, fever, tiredness, nausea, headache, or stomach pain. In about 1% of cases, polio can cause paralysis. Among those who are paralyzed, about 2 to 10 children out of 100 die because the virus affects the muscles that help them breathe.

Rubella (German Measles) (Can be prevented by MMR vaccination)

Rubella is caused by a virus that is spread through coughing and sneezing. In children rubella usually causes a mild illness with fever, swollen glands, and a rash that lasts about 3 days. Rubella rarely causes serious illness or complications in children, but can be very serious to a baby in the womb. If a pregnant woman is infected, the result to the baby can be devastating, including miscarriage, serious heart defects, mental retardation and loss of hearing and eye sight.

Tetanus (Lockjaw) (Can be prevented by Tdap vaccination)

Tetanus mainly affects the neck and belly. When people are infected, the bacteria produce a toxin (poison) that causes muscles to become tight, which is very painful. This can lead to "locking" of the jaw so a person cannot open his or her mouth, swallow, or breathe. The bacteria that cause tetanus are found in soil, dust, and manure. The bacteria enter the body through a puncture, cut, or sore on the skin. Complete recovery from tetanus can take months. One to two out of 10 people who get tetanus die from the disease.

Varicella (Chickenpox) (Can be prevented by varicella vaccination)

Chickenpox is caused by the varicella zoster virus. Chickenpox is very contagious and spreads very easily from infected people. The virus can spread from either a cough, sneeze. It can also spread from the blisters on the skin, either by touching them or by breathing in these viral particles. Typical symptoms of chickenpox include an itchy rash with blisters, tiredness, headache and fever. Chickenpox is usually mild, but it can lead to severe skin infections, pneumonia, encephalitis (brain swelling), or even death.

EMPLOYMENT OPPORTUNITIES
View our County job openings
MEETINGS AND AGENDAS
View agendas and minutes
INFORMATION REQUESTS
Submit our Form
ONLINE PAYMENTS
Make a Payment Online!
NOTIFY US
Let us know how we can help!
TRAVEL & ROAD CONDITIONS
Get the latest updates!
COMMISSIONERS
Get to know your County Commissioners!
PROPERTY TAX SEARCH
Explore our tax lookup for your records
Government Websites by CivicPlus®
[]